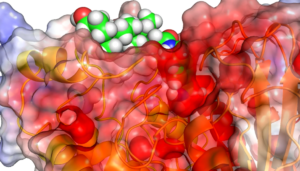 Polycystic hepatorenal diseases are hereditary, genetic disorders characterised by the progressive development of multiple symptomatic cysts in the kidneys and/or liver which may cause alterations in the function of these organs and/or complications associated with their growth. Right now, there are no effective pharmacological treatments and the only curative option is organ transplant.

Researchers at the University of the Basque Country (UPV/EHU) led by Dr Fernando Cossío, scientific director of Ikerbasque, and in the Liver Diseases Group at the Biodonostia Institute of Health Research, led by the Ikerbasque research fellow Dr Jesús M. Bañales, have collaborated on the development of new drugs that have proven to be effective in reducing the growth of hepatic and renal cysts in experimental models of this disease, which could be of huge clinical significance. Researchers at the University of Salamanca, led by Dr José J. G. Marín, at the Idibell Institute of Catalonia, led by Dr Manel Esteller, and at the Hormel Institute of Minnesota (USA), headed by Dr Sergio Gradilone, have collaborated in this multidisciplinary project led by the two Basque institutions.

The drugs developed are based on the structure of ursodeoxycholic acid (UDCA), a bile acid present in the body at a low concentration and which has protective properties for the liver. In fact, its administration is recommended for treating specific liver diseases. The researchers based themselves on the structure and properties of this molecule to design and synthesise a family of chemical derivatives geared towards inhibiting a key protein responsible for encouraging the growth of hepatorenal cysts. The results published have shown that these new drugs are capable of blocking the growth of hepatic and renal cysts in an animal model of this disease.

The promising therapeutic effects of these new drugs have managed to spark great interest in the international scientific community. So much so that the work was selected to be presented orally at the International Congress of the EASL, the European Association for the Study of the Liver, held in Vienna. It has also been published recently in the prestigious international journal Hepatology (official journal of the American Association for the Study of Liver Diseases), and has given rise to the PhD thesis by Dr Francisco J. Caballero (UPV/EHU, Biodonostia), lead author of the said work, supervised by Dr Fernando Cossío (UPV/EHU) and Dr Jesús M. Bañales (Biodonostia, Ikerbasque).

This project recently received the FIPSE national award for Innovation (Ministry of Science and Innovation) which enabled a patent for these drugs to be taken out; they have been licensed to the company ATLAS Molecular Pharma of the Basque Country so that their clinical study can be pursued. This project has also had competitive funding from the RIS3 Euskadi Programme, Ministry of Science and Innovation, the Carlos III Institute of Health (ISCIII) and Ikerbasque.

Suggestion Box
Scroll
We use cookies to ensure that we give the best user experience on our website. If you continue to use this site we will assume that you agree.AcceptRead more